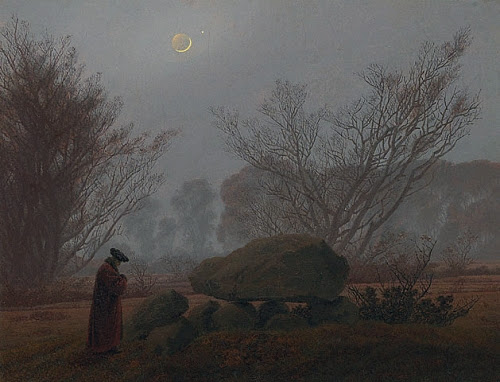 If ever you have found yourself alone,
Loveless, bereft of God, upon the plain,
And bound your wounds, silent, too proud to groan,
Defying fate to strike you once again;

If ever every happy hope has flown,
As listens to his lost pack's cry in vain
The mountain hunter, and hears how far their tone,
As flees the bird from winter's snow and rain;

Were you thus on a lone heath all alone,
You know then too how some force made you kneel
And fling your arms around a silent stone;

And how, frightened by loneliness, you rise
In horror from the rock that cannot feel
And stretch your arms out to the windy skies.

The wind is alien; your arms naught enfold;
The stone is dead; from it you seek in vain
A word of comfort that might still your pain;
The gentle roses are no whit less cold;

You see them, unaware of you, unfold--
Busied with their own dying; and again
Where'er you turn decay and death obtain
And all life's highways in their thralldom hold.

And if you see from out their huts men start
They slam the windows shut before your stare;
The huts collapse; stark horror grips your heart.

Loveless, bereft of God, your path is dread;
The wind of life grows cold; your own despair
Fills the whole world and finds it cold and dead. 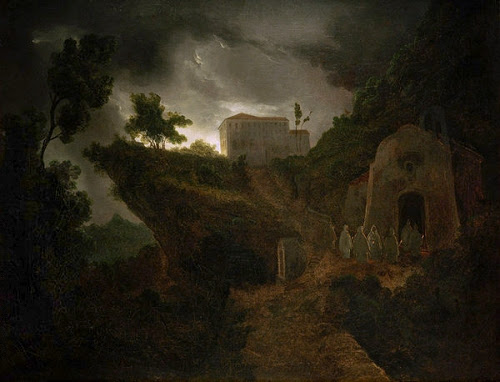 THE PILGRIM OF ST. JUST

Pitch-black the night, and loud the tempests roar.
O, Spanish monks, come open me the door.

Here let me rest and let me stay
Till morning bell awakens you to pray.

Prepare for me the raiment that is meet,
A cowl, a mantle and a winding sheet.

Within a narrow cell let me recline.
Once, more than half the world was mine.

The head that many a jewelled crown has worn
Awaits the shears, so let it now be shorn.

To don the cowl this shoulder bends low down
That once has worn a royal ermine gown.

Now before death like a dead man I stand
And fall in ruins like my ancient land.

The poem concerns Charles V, who had the misfortune of being the emperor of the Holy Roman Empire at the time of the Protestant Reformation. The emperor proved powerless to halt the schism, and Christendom was sundered in twain. Charles ultimately abdicated the throne and retreated to life inside a convent, this fate being the proximate inspiration for Platen's poem. In German, the final line reads, "Und fall in Trümmer, wie das alte Reich," which literally means, "And fall in ruins like the ancient Empire," meaning the Holy Roman Empire.

(Illustration is Carl Gustav Carus, Heimkehr der Mönche ins Kloster (The Homecoming of the Monks to the Cloister), c.1816-18.)
Posted by Ritterorden at 4:10 AM 0 comments 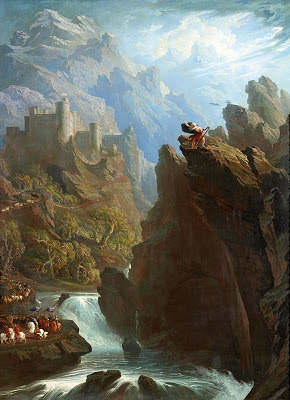 THE BARD. A PINDARIC ODE

Thomas Gray
"The following Ode is founded on a Tradition current in Wales, that Edward the First, when he completed the conquest of his country, ordered all the Bards, that fell into his hands, to be put to death." [Gray's note]

- - - -
"Ruin seize thee, ruthless King!
Confusion on thy banners wait,
Tho' fanned by Conquest's crimson wing
They mock the air with idle state.
Helm, nor Hauberk's twisted mail,
Nor even thy virtues, Tyrant, shall avail
To save thy secret soul from nightly fears,
From Cambria's curse, from Cambria's tears!"
Such were the sounds, that o'er the crested pride
Of the first Edward scatter'd wild dismay,
As down the steep of Snowdon's shaggy side
He wound with toilsome march his long array.
Stout Glo'ster stood aghast in speechless trance:
"To arms!" cried Mortimer, and couch'd his quiv'ring lance.

On a rock, whose haughty brow
Frowns o'er old Conway's foaming flood,
Robed in the sable garb of woe,
With haggard eyes the Poet stood;
(Loose his beard, and hoary hair
Stream'd, like a meteor, to the troubled air)
And with a Master's hand, and Prophet's fire,
Struck the deep sorrows of his lyre.
"Hark, how each giant-oak, and desert cave,
Sighs to the torrent's aweful voice beneath!
O'er thee, oh King! their hundred arms they wave,
Revenge on thee in hoarser murmurs breath;
Vocal no more, since Cambria's fatal day,
To high-born Hoel's harp, or soft Llewellyn's lay.

"Cold is Cadwallo's tongue,
That hush'd the stormy main:
Brave Urien sleeps upon his craggy bed:
Mountains, ye mourn in vain
Modred, whose magic song
Made huge Plinlimmon bow his cloud-top'd head.
On dreary Arvon's shore they lie,
Smear'd with gore, and ghastly pale:
Far, far aloof th' affrighted ravens sail;
The famish'd Eagle screams, and passes by.
Dear lost companions of my tuneful art,
Dear, as the light that visits these sad eyes,
Dear, as the ruddy drops that warm my heart,
Ye died amidst your country's cries--
No more I weep. They do not sleep.
On yonder cliffs, a griesly band,
I see them sit, they linger yet,
Avengers of their native land:
With me in dreadful harmony they join,
And weave with bloody hands, the tissue of thy line.

"Fond impious Man, think'st thou, yon sanguine cloud,
Rais'd by thy breath, has quench'd the Orb of day?
To-morrow he repairs the golden flood,
And warms the nations with redoubled ray.
Enough for me: With joy I see
The different doom our Fates assign.
Be thine Despair, and scept'red Care,
To triumph, and to die, are mine."
He spoke, and headlong from the mountain's height
Deep in the roaring tide he plung'd to endless night.


This text presents the first three stanzas of Thomas Gray's poem "The Bard," as well as the conclusion. In the first two stanzas, the speaker, the last surviving bard of Wales (Cambria), launches his curse against Edward I. In the third stanza, he names the other bards whom the king has killed. The following stanzas (which are omitted here) have the Bard prophesying the misery and ruin that will befall Edward's line. In the final stanza, included in this excerpt, the Bard commits heroic suicide by leaping off of the cliff of Snowdon into the Conway river below.

A complete text of the poem, including Gray's original explanatory notes, appears here. 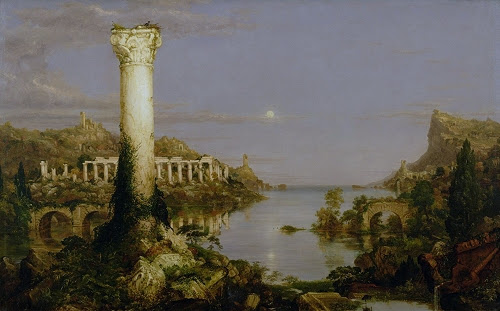 Chidher, the ever youthful, told:
I passed a city, bright to see;
A man was culling fruits of gold,
I asked him how old this town might be.
He answered, culling as before:
"This town stood ever in days of yore,
And will stand on forevermore!"
Five hundred years from yonder day
I passed again the selfsame way,

And of the town I found no trace;
A shepherd blew on a reed instead;
His herd was grazing on the place.
"How long," I asked, "is the city dead?"
He answered, blowing as before:
"The new crop grows the old one o'er,
This was my pasture evermore!"
Five hundred years from yonder day
I passed again the selfsame way.

A sea I found, the tide was full,
A sailor emptied nets with cheer;
And when he rested from his pull,
I asked how long that sea was here.
Then laughed he with a hearty roar:
"As long as waves have washed this shore
They fished here ever in days of yore."
Five hundred years from yonder day
I passed again the selfsame way.

I found a forest settlement,
And o'er his axe, a tree to fell,
I saw a man in labor bent.
How old this wood I bade him tell.
"'Tis everlasting, long before
I lived it stood in days of yore,"
He quoth; "and shall grow evermore."
Five hundred years from yonder day
I passed again the selfsame way.

I saw a town; the market-square
Was swarming with a noisy throng.
"How long," I asked, "has this town been there?
Where are wood and sea and shepherd's song?"
They cried, nor heard among the roar:
"This town was ever so before,
And so will live forevermore!"
Five hundred years from yonder day
I want to pass the selfsame way.

''The Charge of the Light Brigade'' 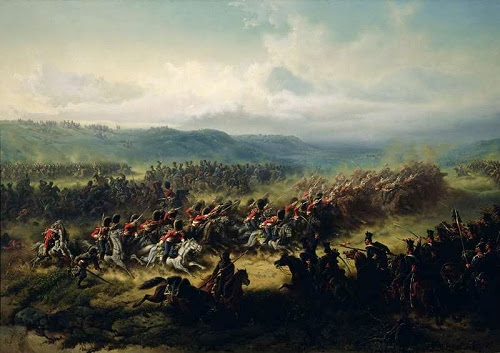 THE CHARGE OF THE LIGHT BRIGADE

"Forward, the Light Brigade!"
Was there a man dismay'd?
Not tho' the soldier knew
Some one had blunder'd.
Theirs not to make reply,
Theirs not to reason why,
Theirs but to do and die.
Into the valley of Death
Rode the six hundred.

Flash'd all their sabres bare,
Flash'd as they turn'd in air
Sabring the gunners there,
Charging an army, while
All the world wonder'd.
Plunged in the battery-smoke
Right thro' the line they broke;
Cossack and Russian
Reel'd from the sabre-stroke
Shatter'd and sunder'd.
Then they rode back, but not,
Not the six hundred.