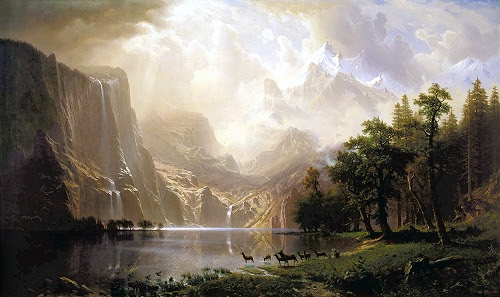 Lord Byron
"Lachin y Gair, or, as it is pronounced in the Erse, Loch na Garr, towers proudly pre-eminent in the northern highlands, near Invercauld. One of our modern tourists mentions it as the highest mountain, perhaps, in Great Britain. Be this as it may, it is certainly one of the most sublime and picturesque amongst our ‘Caledonian Alps.’ Its appearance is of a dusky hue, but the summit is the seat of eternal snows. Near Lachin y Gair I spent some of the early part of my life, the recollection of which has given birth to these stanzas." [Byron's note]

- - - -
Away, ye gay landscapes, ye garden of roses!
In you let the minions of luxury rove;
Restore me the rocks, where the snow-flake reposes,
Though still they are sacred to freedom and love:
Yet, Caledonia, beloved are thy mountains,
Round their white summits though elements war;
Though cataracts foam ’stead of smooth-flowing fountains,
I sigh for the valley of dark Loch na Garr.

Ah! there my young footsteps in infancy wander’d;
My cap was the bonnet, my cloak was the plaid;
On chieftains long perish’d my memory pondered,
As daily I strode through the pine-cover’d glade;
I sought not my home till the day’s dying glory
Gave place to the rays of the bright polar star;
For fancy was cheered by traditional story,
Disclosed by the natives of dark Loch na Garr.

“Shades of the dead! have I not heard your voices
Rise on the night-rolling breath of the gale?”
Surely the soul of the hero rejoices,
And rides on the wind, o’er his own Highland vale.
Round Loch na Garr while the stormy mist gathers,
Winter presides in his cold icy car:
Clouds there encircle the forms of my fathers;
They dwell in the tempests of dark Loch na Garr.

“Ill-starred, though brave, did no visions foreboding
Tell you that fate had forsaken your cause?”
Ah! were you destined to die at Culloden,
Victory crown’d not your fall with applause:
Still were you happy in death’s earthy slumber,
You rest with your clan in the caves of Braemar;
The pibroch resounds, to the piper’s loud number,
Your deeds on the echoes of dark Loch na Garr.

Years have roll’d on, Loch na Garr, since I left you,
Years must elapse ere I tread you again:
Nature of verdure and flow’rs has bereft you,
Yet still are you dearer than Albion’s plain.
England! thy beauties are tame and domestic
To one who has roved o’er the mountains afar:
Oh for the crags that are wild and majestic!
The steep frowning glories of dark Loch na Garr!


(Illustration is Albert Bierstadt, Among the Sierra Nevada Mountains, 1868.)
Posted by Ritterorden at 11:24 PM