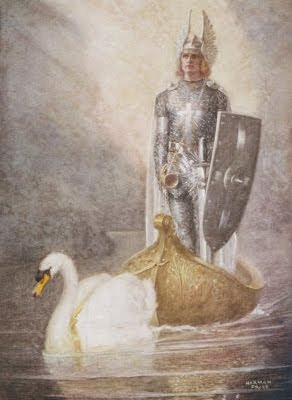 Jakob & Wilhelm Grimm
The Duke of Brabant and Limburg died, without leaving other heirs than a young daughter, Els, or Elsa by name; her he recommended on his deathbed to one of his retainers, Friedrich von Telramund. Friedrich, the intrepid warrior, became emboldened to demand the youthful duchess’ hand and lands, under the false claim that she had promised to marry him. She steadfastly refused to do so. Friedrich complained to Emperor Henry I ("the Fowler"), and the verdict was that she must defend herself against him, through some hero, in a so-called divine judgment, in which God would accord the victory to the innocent, and defeat the guilty. As none were ready to take her part, the young duchess prayed ardently to God to save her; and far away in distant Montsalvatsch, in the Council of the Grail, the sound of the bell was heard, showing that there was someone in urgent need of help. The Grail therefore resolved to despatch as a rescuer, Lohengrin, the son of Parsifal. Just as he was about to place his foot in the stirrup a swan came floating down the water drawing a skiff behind him. As soon as Lohengrin set eyes upon the swan, he exclaimed: "Take the steed back to the manger; I shall follow this bird wherever he may lead me."

Meanwhile Elsa had summoned her chieftains and retainers to a meeting in Antwerp. Precisely on the day of the assembly, a swan was sighted swimming upstream (river Scheldt) and drawing behind him a skiff, in which Lohengrin lay asleep on his shield. The swan promptly came to land at the shore, and the prince was joyfully welcomed. Hardly had his helmet, shield, and sword been taken from the skiff, when the swan at once swam away again. Lohengrin heard of the wrong which had been done to the duchess and willingly consented to become her champion. Elsa then summoned all her relatives and subjects. A place was prepared in Mainz for Lohengrin and Friedrich to fight in the emperor's presence. The hero of the Grail defeated Friedrich, who confessed having lied to the duchess, and was executed with the axe. Elsa was awarded to Lohengrin, they having long been lovers; but he secretly insisted upon her avoiding all questions as to his ancestry, or whence he had come, saying that otherwise he would have to leave her instantaneously and she would never see him again.

For some time, the couple lived in peace and happiness. Lohengrin was a wise and mighty ruler over his land, and also served his emperor well in his expeditions against the Huns and the heathen. But it came to pass that one day in throwing the javelin he unhorsed the Duke of Cleve, so that the latter broke an arm. The Duchess of Cleve was angry, and spoke out amongst the women, saying, "Lohengrin may be brave enough, and he seems to be a good Christian; what a pity that his nobility is not of much account for no one knows whence he has come floating to this land." These words pierced the heart of the Duchess of Brabant, and she changed color with emotion. At night, when her spouse was holding her in his arms, she wept, and he said, "What is the matter, Elsa, my own?" She made answer, "The Duchess of Cleve has caused me sore pain." Lohengrin was silent and asked no more. The second night, the same came to pass. But in the third night, Elsa could no longer retain herself, and she spoke: "Lord, do not chide me! I wish to know, for our children's sake, whence you were born; for my heart tells me that you are of high rank." When the day broke, Lohengrin declared in public whence he had come, that Parsifal was his father, and God had sent him from the Grail. He then asked for his two children, which the duchess had borne him, kissed them, told them to take good care of his horn and sword, which he would leave behind, and said: "Now, I must be gone." To the duchess he left a little ring which his mother had given him. Then the swan, his friend, carne swimming swiftly, with the skiff behind him; the prince stepped in and crossed the water, back to the service of the Grail. Elsa sank down in a faint. The empress resolved to keep the younger boy Lohengrin, for his father's sake, and to bring him up as her own child. But the widow wept and mourned the rest of her life for her beloved spouse, who never came back to her.


-from the Bros. Grimm collection Deutsche Sagen (German Legends).
-original title: Lohengrin zu Brabant.
-trans. from Otto Rank, The Myth of the Birth of the Hero (1914).