Manfred and the Witch of the Alps 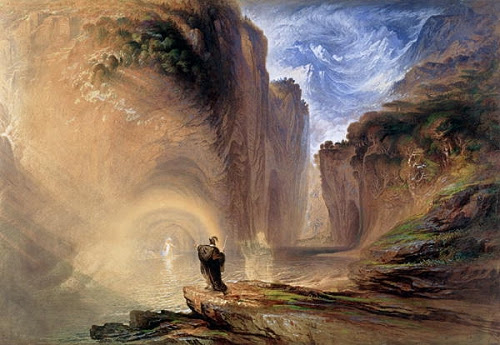 A lower Valley in the Alps.— A Cataract.
MANFRED takes some of the water into the palm of his hand, and flings it in the air, muttering the adjuration. After a pause, the WITCH OF THE ALPS rises beneath the arch of the sunbow of the torrent.

MANFRED: From my youth upwards
My spirit walk'd not with the souls of men,
Nor look'd upon the earth with human eyes;
The thirst of their ambition was not mine;
The aim of their existence was not mine;
My joys, my griefs, my passions, and my powers,
Made me a stranger; though I wore the form,
I had no sympathy with breathing flesh,
Nor midst the creatures of clay that girded me
Was there but one who— but of her anon.
I said with men, and with the thoughts of men,
I held but slight communion; but instead,
My joy was in the Wilderness, to breathe
The difficult air of the iced mountain's top,
Where the birds dare not build, nor insect's wing
Flit o'er the herbless granite; or to plunge
Into the torrent, and to roll along
On the swift whirl of the new breaking wave
Of river-stream, or ocean, in their flow.
In these my early strength exulted; or
To follow through the night the moving moon,
The stars and their development, or catch
The dazzling lightnings till my eyes grew dim;
Or to look, list'ning, on the scatter'd leaves,
While Autumn winds were at their evening song.
These were my pastimes, and to be alone;
For if the beings, of whom I was one,—
Hating to be so,— cross'd me in my path,
I felt myself degraded back to them,
And was all clay again. And then I dived,
In my lone wanderings, to the caves of death,
Searching its cause in its effect, and drew
From wither'd bones, and skulls, and heap'd up dust,
Conclusions most forbidden. Then I pass'd
The nights of years in sciences, untaught
Save in the old-time; and with time and toil,
And terrible ordeal, and such penance
As in itself hath power upon the air
And spirits that do compass air and earth,
Space, and the peopled infinite, I made
Mine eyes familiar with Eternity,


(Illustration is John Martin, Manfred and the Witch of the Alps, 1837.)
Posted by Ritterorden at 7:03 AM